So, why was someone from Family Theater Productions on Sunset Boulevard in Hollywood, California, headed on a filmmaking journey to the western African nation of Ghana?

Family Theater Productions, the company behind the online series Catholic Central, the feature films The Dating Project and Next Level-- and the upcoming documentaries PRAY: The Story of Patrick Peyton and The House That Rob Built-- is part of Holy Cross Family Ministries, which is itself part of the Congregation of Holy Cross, a Catholic order operating all over the world.

So, while it may initially seem strange that Mary Ashley Burton, the showrunner (and director and a writer) of Catholic Central was recently invited to Ghana, it's really not. Catholic Central -- which teaches about the Church in short, entertaining and informative videos -- caught the eye of Holy Cross Brother David Kpobi.

He invited Burton come to Accra, Ghana, in December, to participate in the ANCIFF (Ananse Cinema International Film Festival) Film Lab, mentoring young Ghanaian women on production skills for non-fiction filmmaking. Making movies is nothing new in Ghana, where the film industry stretches back to when the British set up the Gold Coast Film Unit in 1948 and continues to this day, often in partnership with filmmakers in nearby Nigeria.

And here's Burton's story, in her own words:

My first real culture shock in Ghana came when I was sitting at breakfast, leisurely planning the rest of the day under a constant, refreshing breeze from a ceiling fan. Suddenly, the ceiling fan stopped and an eerie stillness surrounded me. Brother Nicholas, one of the Holy Cross brothers that live and teach at a Holy Cross boarding school in Kasoa, came into the kitchen and sighed: "The electricity's out." Alarmed, I started asking questions: Is it out everywhere? Who can we complain to? Do they know how long it'll be out for? What does the electric company say is the reason?

He looked at me, smiled, and shrugged. "It's just part of being Ghanaian."

Ghana was not the first developing country I had spent time in, but it was my first time in a developing country where I was more or less expected to work. I had established a friendship with Brother David Kpobi through, of all things, Facebook, when he had asked in a Catholic Filmmakers group for facilitators to give virtual workshops to a group of aspiring female directors.

I was happy to volunteer, but quickly forgot about it after I sent my contact information. When I later received an email from him asking how I would like to help, I admit I was wary, cautious after having received emails from "Nigerian princes" practically my entire adult life. I was encouraged, however, when I noticed the familiar initials that indicated Holy Cross, C.S.C.

It turned out that, broadly speaking, he and I work for the same organization, and he had even been following the Web series that I produce, Catholic Central. I ended up giving a presentation on new media and web series, since that's the area I work in on a daily basis. Their first question when I finished? "When are you coming to Ghana?"

Fortunately, this was not a prospect that made my boss think I was crazy, and just a few months later I had a ticket bought, courtesy of Family Theater Productions. I had no idea what awaited me in Ghana, and didn't even really know how to form any expectations. In the months before my arrival.

I knew that Brother David had been working tirelessly to organize events in order to get the most out of my visit, but it all seemed so ambitious that I didn't let myself expect anything. A documentary on family prayer? A workshop on adapting Catholic Central for Ghana? Screening the documentary film The Dating Project for Ghanaian youth? Shooting an entire short film with three actresses and another producer flying in, three of whom were fellow Americans? I didn't see how we could get it all done, but I was willing to be along for the ride, helping as much as I could along the way. 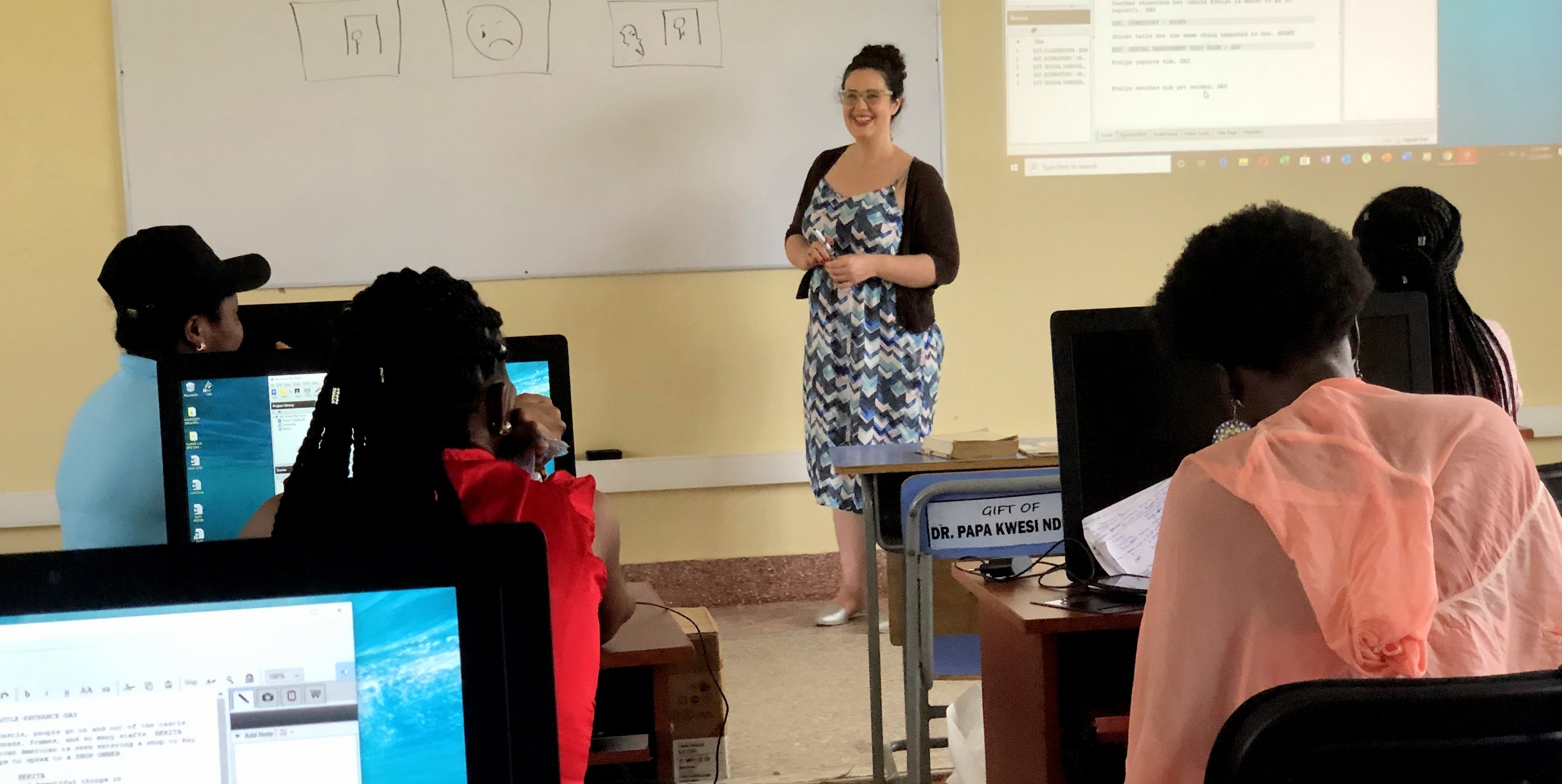 It turned out that my lack of ability to plan was a fitting prelude to the greatest lesson I learned in Ghana: sometimes the best thing that could happen is what comes together when the rest of your plans fall through.

As someone who is used to having back-up plans to my back-up plans, and a natural tendency to want to have a well-defined plan when I'm working, this was a hard lesson to learn. Not being able to predict when the lights would come back on, when we would leave or get back, what time someone would actually show up, or how long something would take, let alone the problem-solving of being in a rural area, gave me fits of anxiety.

Our original planned shoot fell through when one of the lead actresses couldn't fly in. The three other Americans, who I had expected early in the afternoon to collaborate on a new script, didn't arrive until 9 p.m. Exhausted and still very much adjusting to our surroundings, we all agreed to not push ourselves and the participants into making something that, with no prep time and only a skeleton crew, would probably not turn out great. I proposed a list of fundamentals that I assumed someone else had already taught the participants, but it turned out that no one had.

The workshop I ended up putting together at the last minute somehow flowed together as if I had planned it, even though gap without electricity that lasted for most of the day had me scrambling for teaching ideas that didn't require a computer, projector, or light switch.

We went over story structure, character arcs and motivation, theme, script formatting, angles and directing basics, with plenty of time for the four of us to workshop each woman's story with her individually. Once the electricity was back, we taught them how to use a free screenwriting software in the computer lab.

On the morning of the second day, as I launched into how to write loglines, the participants surprised me by telling me they had all collaborated on a concept that they wanted to develop. With time running out, we managed to write the story together, break down the script, block out angles, and shoot the entire film as an exercise in taking an idea and communicating it visually.

After we wrapped, I will never forget the overall feeling of accomplishment and brightly confident smiles of the participants. One of them commented that, after the workshop, she would never stop writing, since before she had been getting stuck, but now she knew where she needed to go with her stories. Others commented that now they felt they really knew how to break down a script. Another commented on how this had ignited her passion for directing.

Almost everyone remarked on how much patience I seemed to have, which I thought was truly hilarious, since the greatest teacher of patience for me was simply trying to get work done in their country.

I experienced a reverse culture shock back in L.A., where no one seems to ever stop complaining about how hard everything is and people are perpetually finding reasons to be angry. When I'm tempted to that kind of cynicism in the future, I will have to look back on the possibility that the rest of the world will be able to hear the stories I was honored with in Ghana one day, and take solace in the knowledge that maybe "wrong" is the way that things are supposed to go after all.

To learn more about Family Theater Productions, visit our homepage here, where you can also learn about our films and series.