He was one of the greatest coaches in college-basketball history, completing his 38th and final season as coach of the Lady Griz of the University of Montana in Missoula in 2015-2016.

Despite overseeing a team composed largely of small-town young women, including many from Native American reservations, Selvig finished his run ranked 8th among all women's basketball coaches, with a total of 865 victories and only 286 losses. The Lady Griz is a NCAA Division I team competing in the Big Sky Conference, and played some of the top teams in the country.

Both Selvig and Schweyen are in the inaugural class of inductees for the Big Sky Conference Hall of Fame, in a ceremony slated for March 14 in Boise, Idaho. 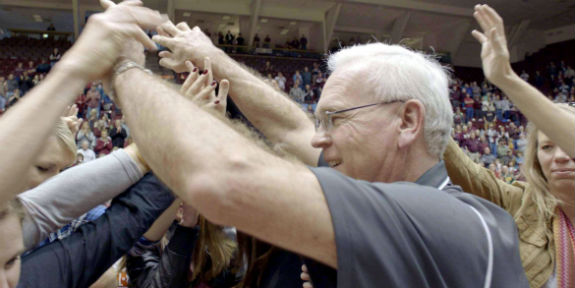 The House That Rob Built makes its festival premiere as part of the Big Sky Documentary Film Festival (homepage here), taking place Feb. 14-23, 2020, in Missoula. The festival is presented under the aegis of the Big Sky Film Institute, which describes itself as:

Rooted in the heart of the mountain west, the Big Sky Film Institute nurtures and elevates non-fiction films that have the power to transform our world, our culture, our youth and ourselves. A non-profit artist development institute, BSFI is the home of the Big Sky Documentary Film Festival in Missoula, Montana.

Our goal is to bring stories from around the world to our beautiful mountain town, support the people who create documentary film, create vibrant events that gather our engaged community, and expand knowledge and conversation around issues that matte

The film is also one of five nominees for the Big Sky Award – presented to a film that artistically honors the character, history, tradition and imagination of the American West – voted on by a select jury composed of filmmakers, film-industry professionals and educators.

UPDATE 2/18: The first two screenings have sold out, so a third was added today, on Sunday, Feb. 23, at 2 p.m. at the UC Theater at the University of Montana. Click here Wednesday, Feb. 19, to buy.

From director Jonathan Cipiti and co-director/producer Megan Harrington -- the same team behind Family Theater's documentary The Dating Project -- The House That Rob Built tracks the evolution of the Lady Griz from its humble beginnings in 1978, against the backdrop of Title IX, through a trajectory that pitted the team against the best in the sport.

Asked about the project, Harrington (a former Lady Griz player) shared these thoughts:

Where did this project begin for you?

I thought about it while Rob was still coaching. When he retired in 2016, sports agent and former Lady Griz team member Jeanne McNulty-King spearheaded a player reunion. Rob didn’t know that over 100 players were going to be there.

We didn’t have all the financial pieces in place but the event wasn’t something you could recreate, so it was a “ready or not” and “don’t try this at home” launch.

Unknowingly, however, the project probably started when my childhood dream came true and I was offered the scholarship to play for Rob. Lady Griz fans are in a league of their own, and to be able to play in front of that crowd was nothing short of amazing.

As a former player for the Lady Griz, what memories of working with Coach Selvig stick out most for you?

The memories playing for Rob that stick out the most aren’t necessarily games, although there are some legendary moments in that regard … he was animated!  It’s the little moments we spent together as a team off the court -- in the locker room, bus ride, road trips, meals, celebrations, pre-season training -- that stay with you, because they made the big moments on the court possible.

What do you hope this film says to female athletes?

Working on this project made me realize how far we’ve come in women’s athletics. It wasn’t that long ago we couldn’t even play college basketball. I hope the film helps female athletes understand, as it did for me, how much we owe those women who paved the way for us to dream our dreams. They were heroic trailblazers who were given an opportunity and played because they loved the game.

What was your most enduring memory of working on this project?

When you work on a film, like any other project, you’re part of a team. And, like those days playing for Rob, the most enduring memories are the endless hours spent together in the trenches, sometimes laughing (or silently crying), working towards a common goal. This was especially true down the stretch with Jon Cipiti and editor John Louis Caiella -- two of the most hard-working, selfless, talented and faithful teammates in the business.

Another enduring moment was when game day arrived and the film was finished. We had left it all on the court, so to speak. I am so grateful Family Theater Productions acquired the film and helped make it happen.

What’s the one thing you hope audiences take away after watching?

Rob was only 25 years old when he took over as coach in 1978. It was an unknown program, even at the University of Montana. He knew his purpose in life was to coach and he pursued it with passion and grit every minute of his career.

He gave women a chance to be elite and made them believe it was possible. And then he asked the university and community to believe in them, too.  They accepted the invitation, and it became a family affair, so that when opponents showed up at Dahlberg Arena in Missoula, Montana, they weren’t just playing against the Lady Griz, they were playing against an entire stadium.

There has been tremendous growth in women’s basketball around the country, so it’s hard to imagine a time when it wasn’t popular. Hopefully, it will offer younger generations a glimpse of what it took to get to this point, while also reminding older generations how important they were to its success.

Click here for the extensive list of films featured at the festival, in such categories as Activism & Justice, Indigenous Stories, Nature & Environment, Arts & Culture, Sports & Adventure (the category for The House That Rob Built), Stranger Than Fiction, and World Focus.

Click here for the official homepage of The House That Rob Built and sign up for further information, including where to see the film in the future.

Play Like A Girl — It’s A Mission, Not a Put-Down (and Our Film Agrees)