Netflix's 'Sweet Magnolias' Is a (Mostly) Refreshing Show about Christians

Ever wonder why there are more than a couple hundred million Christians in our country but so few of them in our TV shows? I certainly do.

The new Netflix series Sweet Magnolias is a nice exception to this non-Christian norm, featuring a bunch of small-town characters who go to church regularly and even pray (shocking, right?).

The show’s creator, Sheryl Anderson, who adapted a novel series of the same name into Sweet Magnolias the series, is herself a Christian. So I was eager to see what she was able to do with Christian characters on Netflix.

The premise of Sweet Magnolias

It’s about three adult female best friends in a small southern town called Serenity. The main character Maddie is going through a messy divorce as the series opens.

There are also some side plots about the teenaged kids (star baseball player, young theater nerd, sweet but quiet girl, mean girl with a tough home life), some of which I actually enjoyed more than the grown-up storylines.

Some good stuff and some not-so-good stuff

There is a lot to like about this show.

It does start off feeling a bit on the cheesy side in the acting and the writing, but the story gains some real momentum by a couple episodes in, and the cheesy moments start to feel fewer and far-er between.

The overall feel of the show is similar to Gilmore Girls or Hart of Dixie, with the small-town setting. And this show might not have as much hilarious quippy dialogue or as many totally one-of-a-kind characters as those two small-town predecessors, but it does have:

We see these characters going to church on Sunday pretty early on (with a female pastor, which probably does feel a bit weird to most of us Catholics, especially since she wears a Roman collar). If it was only this church attendance, I wouldn’t be all that impressed with the Christian content. 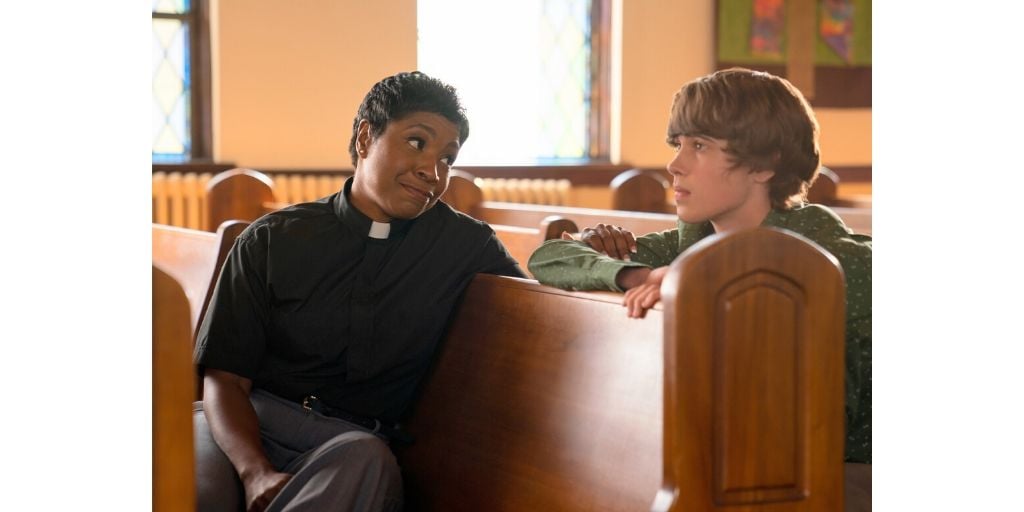 But in the last few episodes of the season, there are two separate scenes where characters are praying and talking about God in really emotional circumstances that are so well-done that I was crying instead of cringing, like I often do when cheese-arific versions of these scenes pop up in faith-based movies or shows.

On the other hand, there’s also some TV-14-worthy content that takes this show out of the realm of faith-based or family shows:

Some non-graphic sexual references, one non-graphic sex scene (these Christian characters don’t seem super acquainted with the concept of saving sex for marriage); what feels like a lot of broken marriages; an unmarried character considering doing some artificial fertility stuff to have a baby; and a side character who is gay (his partner is in one scene -- otherwise I wouldn’t have known). There’s also some light profanity.

But there’s more good than not-so-good

I don’t think Sweet Magnolias is a perfect show. The Christian worldview it presents is not perfect either, but it definitely has more faith substance than I’ve seen in many shows or movies that are considered mainstream.

Personally, I’m eager to see the next season. And I’m hopeful that the popularity of Sweet Magnolias is a sign of good things to come for Christians in our TV shows.

Adrienne Thorne is a Catholic mom, blogger and screenwriter.