“We are under an assault on our sense of virtue,” the popular actor said, silencing a crowd of tens of thousands gathered on the National Mall in Washington, D.C. “The [media] landscape has become increasingly sinister—and, in some cases, even demonic.”

Jonathan Roumie, a devout Catholic who portrays Jesus on the global hit TV series The Chosen, followed about a dozen other well-known figures in speaking at the 50th annual March for Life.

Alongside nonprofit leaders and politicians, a few speakers garnered significant applause — such as Sister Mary Casey and her own sister, Casey Gunning, who has Down Syndrome, and former NFL player and coach Tony Dungy.

But the crowd seemed to reserve its biggest cheers for Roumie. After months of being quoted in USA Today and other major media, it’s perhaps surprising to see Roumie speaking at a rally many consider controversial.

“Standing here saying these things to you now [was not] the obvious career choice,” he said. “I've never set foot in this arena before publicly. But, ultimately, I had no choice.” He pointed heavenward. “This Guy made me do it, and I'm a better man for it.” 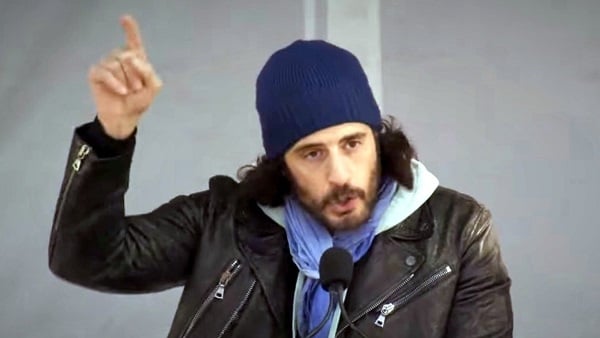 Following remarks about the sanctity of life and his TV role, the heart of Roumie’s speech brought the raucous, largely young-adult crowd often to silence.

Roumie prefaced it by saying: “We need to take a quick glance into the mirror of culture.”

He added he wanted to “communicate a few concerns about where we are as a society” and “propose a couple of thoughts for your consideration.”

In remarks that followed, which have been edited for space, Roumie shared his perspective on popular media as one who has spent the past two decades working in Hollywood.

"I want to speak particularly to those of you here that identify with Gen Z and even Gen Alpha. You are in your formative years, at a moment in time when you have the power to change culture by impacting the culture — through the raising of your powerful voices and voting with your conscience and your resources.

"For some time now, we have been witnesses to a mounting polarity between light and dark. We've seen it manifest itself in many facets of culture.

"But I would like to address it as I see it as an artist in the entertainment industry. In the last several years, there's been a sharp and disturbing increase in the darkness of the imagery being used in film, television, and music.

The actor continued, "The youngest of us and the most vulnerable — as well as those who are not grounded in a solid faith in God — are susceptible to the influences of these images. Media has become a portal to behavior and attitudes kids want to emulate that reject God, reject the light, and reject ultimately all those aspects of community which give life."

The Warped Mirror of Social Media

"As if some fantasy of aesthetic perfection is the road to happiness? It is not. Your imperfections were perfectly designed by God in heaven. As if by objectifying yourself, you will somehow be empowered? That is an empty lie of the enemy.

"Do not let mainstream media's shallow depictions of sexuality and sexual irresponsibility deceive you into thinking that such an approach to love and relationships is without consequences. It isn't."

Roumie Shares How to Turn the Tide

"How can you make a difference? Number one, pray the Rosary.

"Saint Padre Pio said, 'The greatest weapon against the devil we have is the Rosary.' Try it. See for yourself, I don't need to sell it. God doesn't need me to sell anything.

'Secondly, examine and expose the areas of darkness — in your world, in your community, in your immediate society that need your light and bring it everywhere you go.

"I get to continue participating in telling stories like The Chosen and my upcoming film, Jesus Revolution, that shine a light on the struggles and successes of the human condition.

"[These] stories uphold human dignity and reveal God's truth and infinite love for his people despite our inherent flaws. We are all very beautifully flawed, perhaps myself most of all, but we are not alone. He has lived as one of us, and that brings us into communion with Him."

"By honoring the life that God gave you, by bringing your gifts to the world with love and compassion, you will be creating an environment of holiness which the most impressionable in our society will draw their examples from.

"[You can] help rewire the attitudes of society's collective consciousness, steering it back towards the preservation and value of life, restoring respect for faith and true religious tolerance and healing some of our beloved nation's wounds in the process while hopefully planting us more deeply within God's grace."

"He who gave you abundant life and He who has called you by name, says: Do not be afraid."