First, Harrington has already made a film about the life of a Catholic priest, PRAY: THE STORY OF PATRICK PEYTON (which makes its cable-TV debut on UPtv on Holy Saturday, April 16, at 9:30 a.m. ET/6:30 a.m. PT). Second, she's a native of Montana, just like Stuart Long. And third, like Long and Wahlberg, she's Catholic.

Harrington recently attended a screening of Father Stu (ticket info here) in Helena, Montana, where she got to meet Wahlberg. So, I checked in with her to get her thoughts on a variety of topics surrounding the film (below the image). 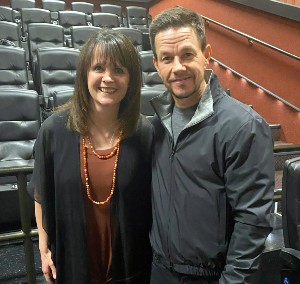 What connections did you see between Father Peyton, whom you profiled (and who founded our company in 1947) and Father Stu?

"Watching the movie in Helena with Father Stu’s father, family and friends was profound. I didn’t know him personally, but my cousin who lives in Helena said he was an incredible confessor.

"After experiencing the movie, I couldn’t help but think of my favorite Irish priest, Father Patrick Peyton.

"It goes without saying, Father Peyton and Father Stu had drastically different families and upbringing. However, as a result of a disease (Father Peyton) and accident (Father Stu), each felt the call of God in their heart.

"Through the intercession of the Blessed Mother, both said yes to following wherever it led ... no matter the cost. Nothing on this side of Heaven was going to stop them.

"Father Peyton was able to speak to families about the importance of family prayer because he experienced the effects of it in his own life.

"If his mom and dad had not planted the seed of faith in young Patrick, perhaps he would not have been equipped to overcome his darkest hour, so that he could go on to reach millions -– literally millions and millions –- of people with the message, 'The family that prays together stays together.'

"A poor Irish immigrant with a temper and a dream of being a millionaire finds his purpose as an ordinary priest with an extraordinary gift of touching hearts and minds. A millionaire in all the ways that mattered.

"Father Stu was able to speak to the sinner, lost, hopeless and marginalized, about God’s love, mercy and forgiveness because he experienced it in his own life.

"He was raised in an extremely dysfunctional family and endured verbal abuse that left deep wounds. He understood emotional and physical suffering, offering up his pain to help save souls.

"A poor Montana kid with a broken family dreams of becoming a boxer and actor finds his purpose as an ordinary priest with an extraordinary gift of touching hearts and minds. Famous in all the ways that mattered.

"Oh, and he also made it to the big screen, just like he dreamed, so there’s a Godwink for you.

"Both men were instruments of God’s grace, fashioned in a way unique to each one’s journey.

"When Mary intervened in their lives, she was present to them in their suffering and offered her mother affection, just as she did with her Son on the way to Calvary.

"She awakened a love of Jesus in the depth of their soul. Paraphrasing the last moments at the foot of the Cross, 'And from that hour they took Mary into their hearts.'

"They understood the power and peace hidden in the Rosary and wanted to lead others to Jesus Christ because they knew He was the way, truth and light.

"I’m sure family and friends in County Mayo [in Ireland] and Helena, Montana, never would have guessed the ending to their stories, considering how they started.

"Heck, I’d be willing to bet the farm I don’t own that Father Peyton and Father Stu were just as surprised as anyone else about how it all unfolded (and continues to unfold as they look down from above).

"The 'Once upon a time' part of their stories couldn’t be more different, but the chapters leading up to 'They lived happily ever after' are very similar.

"I am convinced after working on Father Peyton’s documentary and watching Father Stu’s movie that their legacies and intercession continue 'eternally ever after.' Just ask Mark Wahlberg."

Speaking of Wahlberg, below is a video of an interview he did with Patheos columnist and FTP Social Media Content Manager Kate O'Hare, in which he says that Father Stu is only the first of many faith-based projects.

"I’ve done action. I’ve done drama. I’ve done comedy. I’ve always gravitated towards real stories and biopics, but I think definitely, yes, hopefully, this will be the first of many successful faith-based movies with mainstream audiences with major studios.

"So my plan is to make lots more faith-based content, both film and television, long-form, short-form, and hopefully, Stu will be the first of many.

“I can kind of open the door for other people who have great stories to tell, and if I can help them in any way, I’d be more than happy to."

Harrington then addressed more questions, starting with one about what Wahlberg had to say.

Mark says he wants to produce more faith-based movies through major studios for the mainstream audience. What do you think it will mean that he’s made this pronouncement?

"I am encouraged by his commitment to produce more faith-based movies through major studios because it will raise the bar on how to tell these stories and, as a result, shine a brighter light on the genre.

"There is no sugar-coating Father Stu’s raw and gritty story; it was true to his journey (warning: not a film for kids). The film tackles faith, family, suffering, reconciliation, redemption, grief in a way that reflects Father Stu’s lived experience, and it is powerful.

"There are other true heroic stories where the hero faces these themes with softer edges, and I believe there is a place at the table for each to be told authentically.

"As an example, Father Peyton didn’t have the same personal struggles as Father Stu, but he had other obstacles that are relatable. He overcame human limitations in pursuit of something greater than himself and the results were astounding.

"Both journeys resonate with the human heart as a real-life example of Philippians 4:13: 'I can do all things through Christ who strengthens me.'

"I believe the world needs more stories that radiate light and allow us to believe the impossible is possible. I hope his pronouncement brings like-minded filmmakers around a common table to tell stories that are true, good and beautiful.

"That doesn’t mean there isn’t struggle and darkness, but if life is going to imitate art, I pray we see more stories that leave you uplifted and hopeful."

As a Montana native – and someone who produced a film for FTP set in Montana (The House That Rob Built) -- what do you think Stu’s story on the screen will mean for the state?

"As a Montana native, I loved seeing different Montana landmarks in a faith-filled film of this caliber and think '406' (we have one zip code in the state) will show up across the country.

"He’s one of our own, and it’s exciting to see our state shine. Father Stu wasn’t a celebrity, politician or historic figure.

"Most people haven’t even heard of him, yet a movie about his life is being distributed by Sony in movie theaters across the country because another priest who knew Father Stu thought his transformative story was so compelling it had to be shared with Mark Wahlberg (who, by the way, probably gets pitched at least a dozen projects daily).

"The 'Hail Mary' pass to one of the biggest stars in the business resulted in a touchdown. Father Stu spoke to Mark’s heart, and he spent years and years finding a way to bring it to the big screen. Unbelievable.

"On a bigger scale, beyond Montana’s borders, I feel Father Stu’s story makes room for the greatness of the everyday hero -- people who don’t have a million twitter followers, yet thousands of people show up for their funeral.

'And if we’re going to tell these stories, they have to be told exceptionally. I hope this movie inspires more to be told about everyday heroes because there are other great stories in Montana to be discovered, just like there are untold courageous tales lurking in Iowa, Nebraska, South Dakota and Idaho.'

What single thing about the film moved you the most?

"Many things moved me about the story – there are many powerful themes - so it’s hard to single out one thing.

Many things moved me about the story – there are many powerful themes - so it’s hard to single out one thing.

There was, however, an exchange between Stu and his girlfriend that I thought was beautiful. His girlfriend, not understanding Stu's newfound faith, makes a comment about him supposedly hearing God. Stu responds with something like, 'I didn’t hear Him, I felt Him.'

"After he speaks these words, there is a powerful father-son moment, but no words are spoken.

"Father Stu carried pain, abandonment and brokenness from his childhood, searching in vain to find affirmation in what he could accomplish or achieve.

"When he allowed the Blessed Mother to bring him to Jesus, he opened his soul to be loved by God -- his Heavenly Father -- and found the purpose he’d been searching for all his life.

"He knew who he was created to love and serve and allowed Jesus to 'make all things new.'

"It was reminder of how God -– the Master Storyteller -- is always searching for ways to engage in a conversation between His heart and mine.

"It was a reminder of how the Blessed Mother was a gift to us from her Son and stands ready to fly to our aid whenever we call.

"All too often, I get in the way of feeling His presence and her love by not being still and listening. Thanks, Father Stu."

NOTE TO PARENTS: Father Stu is R-rated, mostly for scenes of Stuart Long's rough-and-tumble life, and for language.