Father O'Malley to Father Brown: Six Onscreen Priests We Have Taken to Our Hearts

Positive portrayals of priests on TV and movies are rarer than they used to be, but they still exist.

We celebrate some of those characters and the actors who play them.

Going My Way (1944) introduced the world to Father O’Malley, who returned a year later in The Bells of St. Mary’s. O’Malley was a kind soul who didn’t want to ruffle feathers yet wanted to make sure the churches were serving their communities.

Father O’Malley is the kind of man you want to have as a friend. He loves to get involved with people and is soft-spoken, plus he can sing. He’d make a great dinner guest.

For many people, Going My Way was their first introduction to a Catholic priest’s work and relationships with the people.

Especially endearing is the relationship he forms with his “senior” colleague Father Fitzgibbon, who is delightfully played by Barry Fitzgerald. Their friendship is the background for this endearing film.

According to Anthony B. Smith, as excerpted in JSTOR,

“Bing Crosby and his character, Fr. O’Malley in the films Going My Way (1944) and The Bells of St. Mary’s (1945) have functioned as the emblematic sentimental portrait of the Catholic priest within the historical memory of American Catholics. …

Their commercial success and impact on popular imagination indicate the important role that Catholics have played in shaping popular culture in twentieth-century America.”

Besides playing Father O’Malley, Crosby once again donned the garment in 1959 in the film Say One For Me.

As a side note, Bing Crosby has a special relationship with Family Theater Productions, as he made an appearance with our founder, Father Patrick Peyton, C.S.C., on his first national radio broadcast, back in 1945. 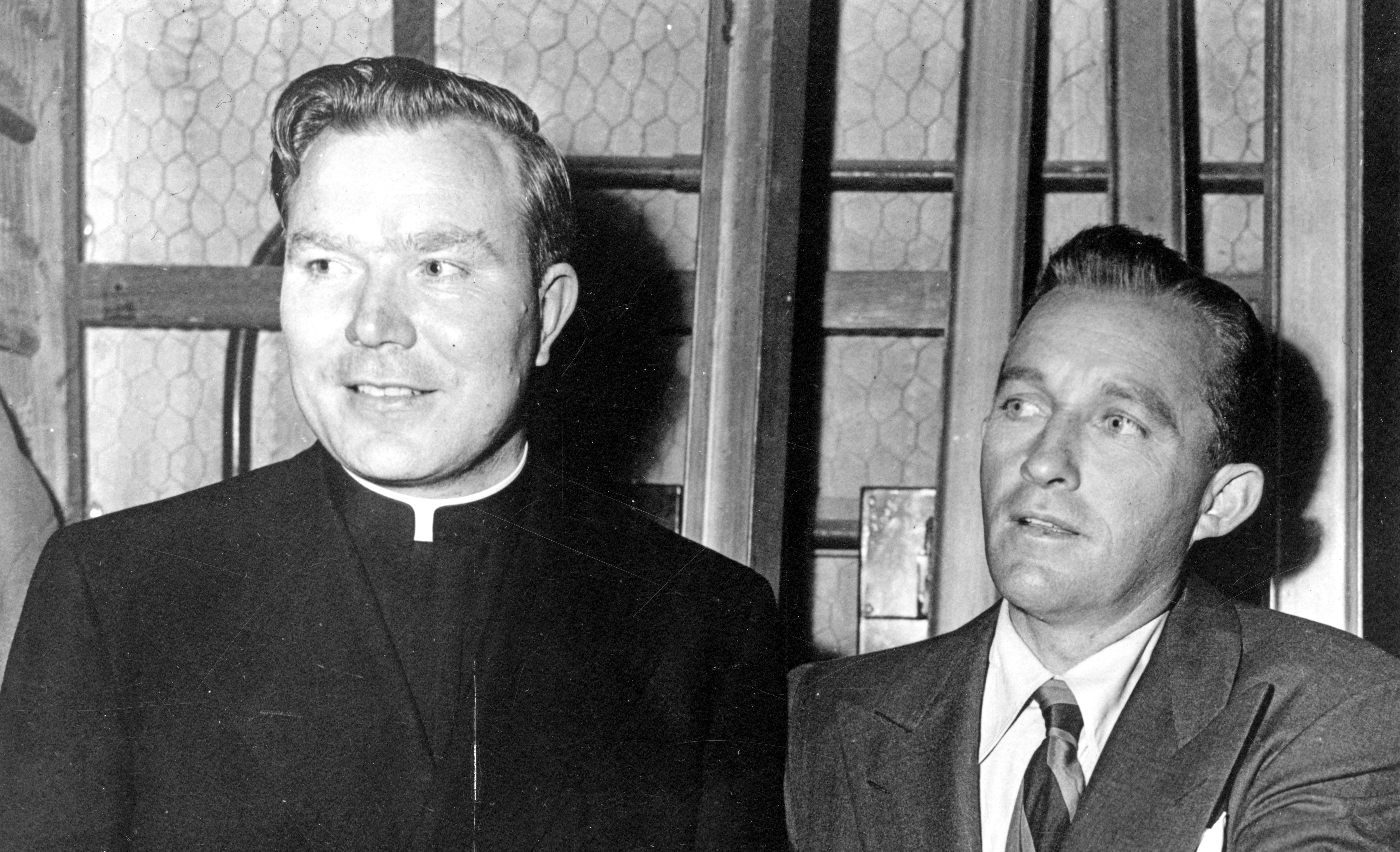 Mark Williams plays the inquisitive and insightful Father Brown in the British series of the same name, based on the crimesolving priest created by Catholic writer G.K. Chesterton.

He is not the first actor to step into Brown’s clerical clothing (more on that later). A devout man, Father Brown finds himself in the middle of one crime after another and even though he is warned by the police to stay out of it, he cannot help himself.

Bicycling around the bucolic Cotswold countryside, Father Brown is well respected and loved by not only his constituents but also by all the others and definitely by the viewers.

Williams told Kate O'Hare's Pax Culturati at Patheos in 2020, “Father Brown is a man of faith, and he tries to live by that. And as G.K. Chesterton knew when he set out to write a detective who was a man of faith, that it’s not just an intellectual exercise, not just a crossword, to solve a crime.”

What viewers enjoy about the character is his love of life and his delightful charm as he inserts himself into one investigation after another.

While the stories are entertaining, what makes this series as popular as it is, having been running since 2013 and still going strong, is the sweetness and dare I say a little naïveté of the title character.

He is childlike in many ways, yet his mind works like the TV detective Columbo. He can put pieces together before the police. He is definitely a priest that would add a lot to any dinner party.

Season 10 of Father Brown is expected to premiere in January on BBC One, and should also air in the U.S on BritBox. The series also airs in syndication on select PBS stations in the U.S.

As mentioned above, Mark Williams is not the first actor to play Father Brown. In 1954, Alec Guinness starred in the film The Detective. This movie was the precursor to the TV series and not only showed Guinness in the fun role, but also proved to be the catalyst for his converting to Catholicism.

According to Catholic Culture, Guinness stated, "There had been no emotional upheaval, no great insight, certainly no proper grasp of theological issues; just a sense of history and the fittingness of things."

His wife joined him in the process of converting, and their son declared his intention on becoming Catholic.

Click here to watch a clip from the film, courtesy of TCM.

In the TV series Blue Bloods, Stacy Keach plays Archbishop Kevin Kearns. Unlike the sweet, cuddly priests mentioned above, this guy is a straight-laced, by-the-book leader of the Church.

He often comes to near-blows with Police Chief Frank Reagan (Tom Selleck), also a devout Catholic. But where Reagan puts the safety and best interests of the whole first, Archbishop Kearns’ loyalty is solely to the Church.

While Keach's portrayal of Kearns did not lead him to Catholicism, his time in a British prison in the mid-'80s did. He became friendly with the prison priest and ultimately decided to convert to Catholicism.

It’s worth mentioning a couple other onscreen priests of note. First up, St. Josemaria Escriva, as played by Charlie Cox in the film 2011 film There Be Dragons.

Cox wanted to do justice to the real-life man who started Opus Dei, saying to Busted Halo, “Initially, I’d never heard of him, and I knew very little of Opus Dei and all that — was the immense amount of responsibility that I felt, in that, yes, the primary reason that we make films and TV shows is for entertainment purposes, but every now and again there comes along a project where there’s something more there, and it’s not just about entertaining people.

“It’s not just about people losing themselves for a couple of hours in the movie theater. This story, and particularly this man, is of great importance to hundreds of thousands of people.”

Shia LaBeouf plays Italian priest St. Padre Pio in the 2022 film of the same name. To prepare for this role, the actor lived in a monastery. The effect of this project was so deep for the actor that he has started the journey to convert to Catholicism.

Priests and the Oscars

It is evident priests on the big or small screen are popular characters. The following actors have garnered Oscar nominations for their portrayals of the religious leaders: Bing Crosby, Barry Fitzgerald, Spencer Tracy for San Francisco in 1936 and Boys Town in 1938; Charles Bickford for The Song of Bernadette in 1943; Barry Fitzgerald and Bing Crosby for Going My Way in 1944; Gregory Peck for The Keys of the Kingdom in 1944; Karl Malden for On the Waterfront in 1954; Jason Miller for The Exorcist in 1973; Philip Seymour Hoffman for Doubt in 2008.

On a Personal Note

For me, the most memorable and beloved onscreen priest is a toss-up among Father O’Malley, Father Fitzgibbon, and Father Brown. At this point Father O’Malley is winning by a nose, or I should say an ear, since, after all, we are talking about Bing Crosby.

Francine Brokaw is a longtime journalist, covering entertainment, product reviews and travel, and is the host of Beyond the Red Carpet on Village Television and YouTube.