Katy Perry and Pope Francis: 'My mom has prayed for me my entire life, hoping I’d come back to God'

Katy Perry met the pope, and she liked it.

In an interview published yesterday in the Australian version of Vogue, pop star Katy Perry -- who's currently a judge on ABC's revival of "American Idol" -- talked about going to the Vatican and meeting Pope Francis.

"It started when we were on the Asia leg of the tour and I went to mass with my mom,” Katy tells me. “She hadn’t sung those songs in 40 years and watching her made me cry. It’s so beautiful and humbling to re-centre in a place where it’s not about anything else but reconnecting with the divine.”

Hudson wasn't thrilled about all of her daughter's music, especially one of her hit songs.

Unsurprisingly, her first megahit, 2008’s I Kissed a Girl, didn’t go platinum around the family dinner table. “My mom has prayed for me my entire life, hoping I’d come back to God. I never left Him, I was just a little bit secular, I was more materialistic and more career-driven. But now that I’m in my 30s, it’s more about spirituality and heart wholeness.”

Perry, 33, boyfriend Orlando Bloom (Legolas from "The Lord of the Rings" and "The Hobbit" movies) and Hudson, traveled to Rome so Perry could speak at a health-centered Vatican conference, on the subject of meditation.

Then came the moment they met the pope (more pictures here). 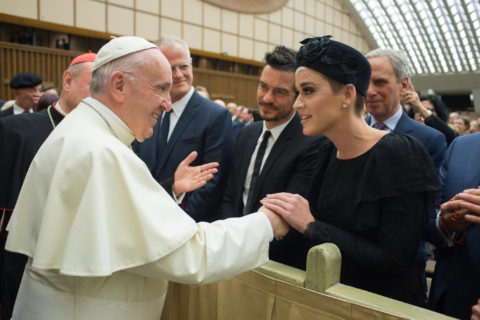 “I’m such a big fan of Pope Francis. It’s a combination of compassion, humility, sternness and refusal. He is rebel – a rebel for Jesus.” Katy lists some papal facts, including that he named himself after Francis of Assisi, her favourite saint, and that he sticks to his vow of poverty despite the lavish surroundings of the Vatican. “He is bringing the Church back to humility and connecting with people. He’s very humble and not frivolous.” He’s also a lover of animals and is often depicted surrounded by wooded creatures, which reminds her of her favourite Disney character, Snow White.

You can read the whole story here.

Back in California, Perry intersected with the Archdiocese of Los Angeles when, in 2014, she tried to buy an eight-acre complex that was the convent home for the Sisters of the Most Holy and Immaculate Heart of the Blessed Virgin Mary in the upscale Los Feliz neighborhood.

Founded in California, the Immaculate Heart Sisters, as they were known, specialized in educating young women. But an encounter with alternative psychology in the 1960s largely led to the dissolution of the order as a Catholic entity. By the time Perry wanted to buy the former convent, there were only a handful of sisters left, and those were advanced in years.

Perry offered $14.5M in cash for the hilltop property, which Archbishop Jose Gomez approved. But, but two of the remaining sisters -- who had vacated the property in 2011 -- argued that it wasn't the Archdiocese's to sell. They objected to the sale -- preferring a different buyer - leading to a five-year legal battle with Perry (click here for a full rundown from Billboard). In 2017, a judge ruled in favor of the sale to Perry.

In March 2018, one of the sisters died during a court appearance.

As of the time Perry visited the Vatican, the pope needed to approve Archbishop Gomez's original contract to sell to Perry. There's no word whether the two discussed it during their meeting. Reportedly, Perry wants to share the property with her mother and grandmother.

According to the most recent press reports, as of March, the sale was still on hold.

As for the future, we can only hope that Perry's mother keeps praying -- because we all know the power of a mother's intercession.

Family Theater Productions’ upcoming, new and vintage productions as well as our Hollywood Outreach Programs; and, of course, you’ll find us on Facebook. Visit our YouTube and Ustream Channels for our contemporary and classic productions.