Take Your At-Home Family Viewing to the 'Next Level'

In these stay-at-home days, teens and their families are looking for something to watch that's entertaining and has good messages. We may have just the film for them -- Next Level.

Produced by The Loft Entertainment, MarVista Entertainment and Family Theater Productions, it's a fun teen musical about a summer camp for young performers, full of high-stepping dancing and catchy tunes. It's available to watch on Amazon Prime Video (click here), and other platforms and DVD (click here). You can also buy the soundtrack (here).

So, we checked in with Family Theater's own Tony Sands, an executive producer on the film, who was on hand for much of the filming. Read what he had to say, below the image. 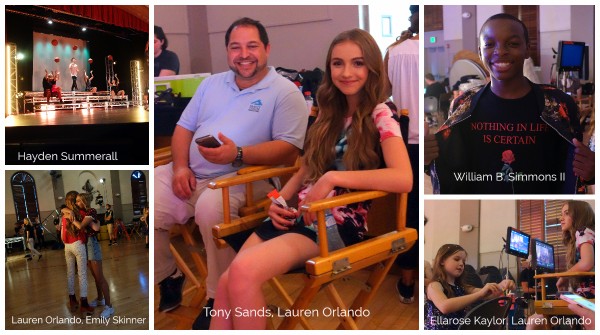 How did Family Theater get involved in Next Level?

Family Theater was introduced to the project by one of our dedicated board members, who has made a career of entertaining families with innovative toys through The Beverly Hills Teddy Bear Company.

Then The Loft Entertainment brought us the cast, the director and the story, and we saw this as a promising team with a script that provided family fun with a morally positive story. It featured a ton of creative singing and dancing with a good message that wasn’t too preachy. This inspired us to jump on board with the film.

Why does Family Theater consider this a film for families?

Next Level is good, solid family fun with a storyline aimed at kids and teenagers but still entertaining for adults. With catchy songs and impressive dance numbers, the film taps into the trend of singing and dancing competition shows that millions of families watch every week around the world.

In addition, the film touches on family relationships, like that between the teen stars and their parents. It also addresses issues that are universal to families such as fitting in, bullying, developing your talents, and being true to who you are.

Tell us about your experiences during production.

We had an amazing cast brought to the film by producer Kristi Kaylor. The director is Ilyssa Goodman, who was also part of the team that made A Cinderella Story and its sequels. The cast was a ton of fun who hung out with each other between scenes and were good sports during filming. A true singer at heart, Brooke Butler would constantly break into song between takes.

There was a hilarious game of one-on-one where star Lauren Orlando, who plays Kelly (and is famous on Instagram), challenged male lead Hayden Summerall, who plays Connor, to a game of basketball. She scored on Hayden – but in the wrong basket!

And one of our actresses allowed us to completely douse her head-to-toe with salsa. To find out why, you will have to watch the film!

What are some good message for teens and families in Next Level?

Connor challenges Kelly asking her if she is afraid to push herself to take her talent to the “next level.” (yes, that purposely ties into the title).

Of course, being competitive can be taken too far. While it can be good to put pressure on ourselves or others to help reach someone’s full potential, it’s not OK to become a bully, which is a lesson learned by one of the film’s co-stars, Cindy Stallings (Emily Skinner). She is the story’s reigning Queen Bee.

The film also talks about finding the courage to be yourself, which is something Kelly discovers can be really hard to maintain as the new girl in the film’s setting, a performing arts camp. This is a recurring theme that applies to her co-stars, Becky (Brooke Elizabeth Butler) and Lucy (Chloe East), who face pressure from parents and peers to either be someone they are not or to be invisible rather than be themselves.

The movie also demonstrates how helpful it is to stand up for the little guy, in this story, literally! The main character, Kelly, befriends one of the camp’s youngest attendees, 7-year old-Josie (Ellarose Kaylor), who is being teased by the other kids. Eventually, Kelly’s support of this young camper helps Josie become a shining star.

There are a number of other heartfelt messages in the film but these are some key themes we hope every viewer takes away from the movie.

What was it like working with the teen stars and their families on set?

Our talented teen stars were not only true professionals, but fun, funny and sincerely nice people. One thing that really struck me was that these teenagers had great parents who accompanied them on set.

There is a longstanding Hollywood warning about overbearing and interfering stage parents with children who are diminutive ivas, but that was the furthest from the truth with this group. The stars were polite, respectful and hardworking kids with sincerely nice and grounded parents. It was truly family filmmaking.

Do you think parents should watch Next Level with their kids?

Absolutely! Family Theater and the team of moviemakers behind Next Level specifically designed this film to be watched as a family. While it is definitely aimed at a tween audience, it can be enjoyed by kids of any age with humor, songs and dance numbers that can be appreciated by adults young and old.

In addition, it is important for parents to watch media with their children, because it can make for great conversation afterward, it can be a fun way to bond, and it gives parents a chance to encourage or explain some of the messages in the film.

For example, the film opens with a humorous scene between Cindy and her mother (Teddi Mellencamp Arroyave). Cindy initially comes off as very entitled and demanding of her mom, but later she is clearly the film’s “bad guy,” who eventually learns the importance of humility and forgiveness. A parent could point that out to a child who watches the film, and remind any young viewer what happens to kids who are rude to their parents.

What would you like families to take away from Next Level?

We would like families to experience a straightforward good time with an enjoyable film that anyone and everyone in the family can watch. Just as important, we would like to instill in kids and parents, young and old the core message of the film: While it is important to pursue your dreams, and while it is good to be “great,” what is best is to be a truly good person.

So enjoy Next Level -- and prepare to clear out a little floor space for dancing along!

'Next Level': Hip-Hop Gets Family-Friendly

NEXT LEVEL: The Teen Musical Is NOW in Theaters and on Digital!