David McCullough and I were close friends.

Naturally, I was saddened to hear of the two-time Pulitzer Prize-winning author and historian’s death on Aug. 7, at the age of 89.

It brought back memories of having dinner together, talking about history, visiting his home in Hingham, Massachusetts, and even sitting next to him in his office while he pounded away on his antique Royal typewriter.

Yes, David and I were friends. He just didn’t know it.

Let me explain. Over the past 20 years, I’ve had the good fortune to attend several public appearances by the eminent and talented chronicler of American history, who also narrated several documentaries, including Ken Burns’ The Civil War, and even a film, Seabiscuit, in 2003.

I was usually there to cover them as a journalist or just to listen. Each time was a transcendent experience of joy as he shared his insightful understanding of the past and its influence on today.

For me, an admitted history geek, it was paradise. Here was this stately man with such a remarkable knowledge of the American experience sharing his love of history in such a personal way — seemingly just to me, even though hundreds of people were sharing the same moment.

I called him David. Well, everybody did. He insisted people call him that. “Mr. McCullough was my father,” he would say in that authoritative yet reassuring baritone voice that seemed to echo across the centuries — the same voice the public came to love when he hosted American Experience on PBS from 1988 to 1999.

Each time we met, David greeted me like an old friend — though I’m sure he had no idea who I was. Actually, he greeted everyone like a long-lost acquaintance.

In person, he was warm and affable with a broad smile and a twinkle of mischievousness in his friendly eyes, which were framed by those oh-so professorial-looking white eyebrows.

As serious as his speeches about history could be, David loved a good joke. He seemed to laugh at will, his whole body shaking in merriment. David would then steal a glance at his wife to see if there was a reaction.

“I’m not allowed out in public without adult supervision,” he would intone with a nod toward his beloved Rosalee, who died just two months before him. She was the speed governor on his playfulness.

We first met in 2001, when David was on tour for his new book John Adams, which later became an acclaimed HBO miniseries.

It was at an outdoor reception at the library in Plymouth, Massachusetts, where I live. I proffered my copy to him for his autograph — just one of a few hundred he signed that day.

We smiled, laughed and had our photo taken together. I was in nirvana.

I got to meet him a few more times that year, including at the Adams National Historical Park in Quincy, Massachusetts. I helped The Boston Globe with an event it sponsored at John Adams’ home, where David was the featured speaker.

Again, he smiled as we exchanged pleasantries. I was thrilled that he seemed to remember me. I’m sure he was just being polite.

The next year, we crossed paths again — this time at the annual Forefathers Dinner held by the Pilgrim Society in Plymouth. David was receiving an award for his contributions in writing about American history.

Since I had suggested he get the honor, I got to sit next to him at dinner. He was warm and gracious as always, smiling at me with a look of bemusement, probably wondering, “Who is this guy and why does he keep telling me we’ve met before?”

We would encounter each other again over the next several years. I would listen to him as he spoke at some lecture, or even cover his speech for the local newspaper.

Of course, I would mention our previous encounters. He would smile and chuckle.

Our last meeting was the best. I interviewed David at his home on a beautiful spring day in 2019. When I arrived, he was sitting on the porch in his rocking chair. I walked up and asked how he was doing.

“Never better,” he boomed with a broad smile. Then he looked at me and asked, “Who are you?” I had to tell him all over again how we were friends.

We spent several hours together as I interviewed him for a magazine article. He had just published The Pioneers: The Heroic Story of the Settlers Who Brought the American Ideal West and had generously allowed me to visit him and Rosalee in the comfort of their home.

Later, we spoke in his office where he wrote his books, which to me was the throne of greatness. 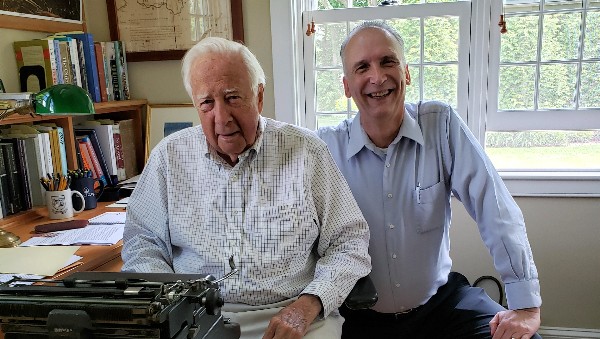 As usual, David told stories, joked and laughed, all the while imparting knowledge about the men and women who helped build America by expanding the frontier.

When I told him I had misplaced my copy of The Wright Brothers—which he had written in 2015 — he handed me the book, which he graciously signed.

As we stood outside after the interview, the photographer snapped photos of the historian and his wife next to the barn in the backyard.

Suddenly, the waggish side of David reappeared.

“Wait a minute!” he blurted out, then ran into the barn, reemerging a few moments later holding a leaf rake. With garden tool in hand, he struck a pose next to Rosalee, a la Grant Wood’s American Gothic.

With that twinkle in his eye again, he said, “Now take the picture.” 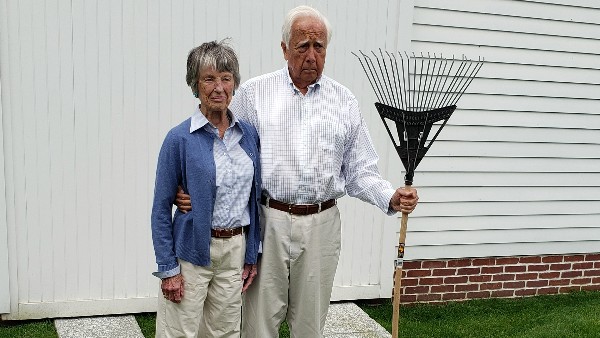 A few years earlier, David had been in Kingston on one of his lecture tours. I sat mesmerized with the audience in the school auditorium, then went backstage for a brief interview. Afterwards, I reminded him once again that we had met before.

“How so?” he asked. I began to tell him of our previous encounters, including that time at the Adams National Historical Park. I told David how I had reintroduced myself there, then stood close by while he spoke to the many others in attendance.

At one point, he glanced over and saw me at his elbow. He turned to the person in front of him and said, “Let me introduce you to my good friend Dave Kindy.”

At that moment, I told him, my life was complete. He roared with laughter.

Though David is gone, I’m sure he is not alone.

In addition to the love of his life, Rosalee, he is in the company of many good friends. I like to think he is laughing once again while sharing stories with John Adams, Harry S. Truman, Teddy Roosevelt, Wilbur and Orville Wright, and many of the other historic Americans he wrote about in his books.

One day, I’m hoping to be reunited with David. I will probably have to remind him once again that we are good friends.

Dave Kindy is an experienced feature writer and book reviewer who specializes in history and nonfiction topics. His articles have appeared in The Washington Post, Smithsonian Magazine, Air and Space, Military History, World War II, Aviation History, HistoryNet, The Boston Globe, Providence Journal, Journal of the American Revolution and Old Colony Memorial, among others.