Jane Austen: A Catholic View of the Genius of the Anglican Author

Celebrated British author Jane Austen may not have been a Catholic, but as the devout daughter of an Anglican clergyman, faith infuses her work -- along with sharp wit, deep wisdom and a surprisingly clear-eyed view of romance.

A Catholic Author Sees Austen as a 'Life Coach'

In the introduction to her book Jane Austen's Genius Guide to Life: On Love, Friendship, and Becoming the Person God Created You to Be, from Ave Maria Press, Catholic author Haley Stewart writes:

Discovering Jane Austen can be dangerous. You think it's going to be all bonnets and ballgowns, and then she swoops in to change your life. ...

Jane Austen is a lot of things. She is one of the finest novelists to write in the English language, a moral philosopher of the highest order, and a sharp social commentator. She's also my life coach.

The Life and Times of Jane Austen

Austen died in 1817 at the age of 41 (no one is quite sure of what, but it was a rapid and debilitating illness), and saw a bit of fame and only a little profit from her writing in her lifetime.

The constant in her life was her beloved sister, Cassandra, and she often had to live off the kindness of relatives, especially her brothers. 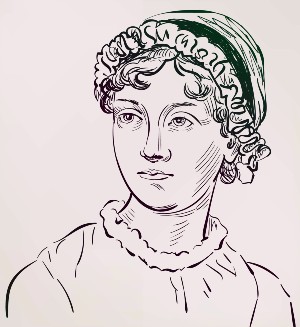 The circle of Austen's life was geographically small. She never left England -- and only once left the southern part of England.

But she had brothers in the British navy, and relatives who led colorful and wide-ranging lives. I recommend British historian and TV presenter Lucy Worsley's excellent biography for the details.

And, you can watch this special Worsley did about the author:

To all that was in her life, Austen brought a keen eye and ear, along with an inborn ability to see the universal humanity in her particular slice of English gentry (the lower rung of it, in the case of her family).

Austen, From Page to Screen

While the most recent Austen film adaptation, Netflix's Persuasion, was a disaster, others, like the BBC's 1995 miniseries version of Pride and Prejudice, and 2020's version of Emma., were more successful.

Even Austen's unfinished works are being mined for TV -- in the case of the British-produced Sanditon, with mixed results.

Austen's books recognize the weaknesses of human nature. After all, the youngest Bennet sister in Pride and Prejudice runs away with a man she wasn't married to and then, still unmarried, lives with him in London.

Austen knew how the world worked, but she didn't need to get into the gritty details.

When season one of Sanditon, which aired in the U.S. on PBS' Masterpiece Theater, included a relatively explicit sex scene, the fans rose up.

In the run-up to season two, the producers indicated they heard this, loud and clear.

From a story I wrote in my Pax Culturati blog at Patheos, based in part on a virtual press conference.:

I asked about that. Said the executive producers and Young:

SUSANNE SIMPSON: Well, we at MASTERPIECE heard that from our fans, and, you know, I would say there’s less of that in the next season.

I don’t know, Justin, Belinda, did you hear the same thing?

JUSTIN YOUNG: I think that speaks to a difference between the British audience and the American audience. I think you’re right, there is a shift. I think the second series ‑‑ totally, I think that content isn’t really there in the same way in the season.

So, I think the reservation that those people had ‑‑ I think, in some ways, Season 2 maybe feels more classically Jane Austen than Season 1. I hope the people that have those concerns won’t have them for the second season.

BELINDA CAMPBELL: I would just add to that in the first season, while I absolutely agreed, you know, it is not traditional Jane Austen.

She alluded to such encounters, so that was the sort of justification and thinking behind it. It was making explicit what she had made implicit in her books.

The characters have evolved, they are different characters, so it wasn’t important nor appropriate for this series.

The Faith of Jane Austen

While Austen's Christian faith isn't always front and center in her books, it infuses the lives of her characters.

Writes Stewart in her book:

As a Catholic Christian, I think Austen should be required reading. This isn't because her characters are rushing off to perpetual adoration or grabbing their rosaries (as Anglicans in the early nineteenth century, they're definitely not doing anything that would be tainted with "papistry.")

It's because the world Austen crafts is built on the same structure of virtues taught in the Catholic tradition.

From CatholicStand.com, on The Theology of Jane Austen:

Because everything Jane Austen wrote was written against the subtle background of her religion.

It was the canvas on which she pictured life and the base of the paints and pastels she used; it was the waters of the sea in which her masterpiece ships sailed; the unspoken calm amidst storms which often tossed her characters about; and it was the life-giving spirit-inspiring air breathed by her wholly real characters.

Her religion was at the core of her reality, and it was the source of the way according to which she lived her life.

The Feminine Genius of Austen Heroines

We now live in an entertainment world obsessed with creating female heroes that act just like male heroes (such as we see with the Galadriel character in Amazon Prime Video's current The Lord of the Rings: The Rings of Power series).

But, Austen created heroines that were of their time and place, but who stood their ground -- all while being ladies.

As British Catholic writer G.K. Chesterton observed in his essay, On Jane Austen in the General Election, remarking on those who held forth that Austen heroines were delicate creatures prone to fainting:

And those happy few of us who happen to have read Jane Austen have generally come to the conclusion that those who refer to her have not read her.

Feminists are, as their name implies, opposed to anything feminine. But sometimes they disparaged the earlier forms of the feminine, even when they showed qualities commonly called masculine.

They talk of Sense and Sensibility without knowing that the moral is on the side of Sense.

They talk about fainting. I do not remember any woman fainting in any novel of Jane Austen. There may be an exception that I have forgotten; there is indeed a lady who falls with a great whack off the Cobb at Lyme Regis.

But few ladies would do that as a mere affected pose of sentiment. But rarely does a lady dash herself from Shakespeare's Cliff or the Monument solely to assume a graceful attitude below.

Jane Austen herself was certainly not of the fainting sort. Nor were her favourite heroines, like Emma Woodhouse or Elizabeth Bennett.

Austen Is for Everyone

Men and women, Christians and non-Christians, have enjoyed Jane Austen for a couple of centuries now. The world she wrote about was not wide, but the wide world has embraced her.

For people of faith, there's an extra dimension. Writes Stewart:

Among the words of memorial that her brother James wrote for her tomb was a description of her early death, which was, "after a long illness, supported by the patience and hopes of a Christian."

Walking in Jane's footsteps, we should live with enduring hope. We should love well, become the people God calls us to be and look toward eternity -- with laughter and a good novel, as I think our life coach would want.